The world’s most respected brand for handling equipment, are proving that a sling lifter can also be used for rehabilitation. Most ceiling lifts are used in healthcare environments to move people from their beds to a seat. A study, however, has also shown that they can also be excellent at getting bedridden residents back on their feet. The GH positioning lock has been designed in a collaboration between the Denmark Horsens Hospital, and Guldmann. The positioning lock provides an additional capability for ceiling lifts to lock in a fixed position for elastic band training and rehabilitation exercise. 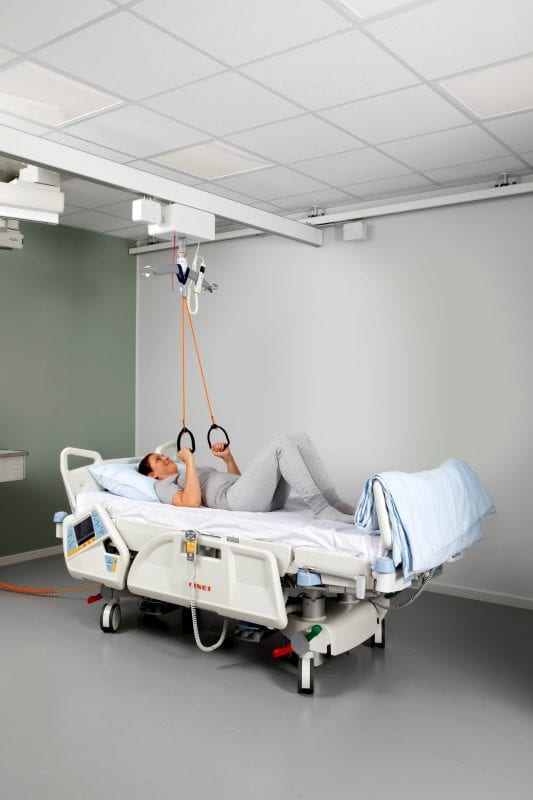 Using a Sling Lifter for Training

An employee at the Horsens Hospital in Denmark came up with the idea of using ceiling lifts for training. After seeing that the tools were excellent at getting people moving when they struggled to get out of bed by themselves. The idea grew with the help of Guldmann, who implemented a new training function for their ceiling lift. The team at Horsens Hospital found that by basing their training and rehabilitation regimen around the abilities of the ceiling lift equipment, they could deliver better options for their residents.

The ceiling lift also meant that fewer members of staff were required to support a training session. Adding the option to train using ceiling lifts at Horsens Hospital has allowed residents to recover faster. With elastic exercise bands, residents can even develop strength whilst sitting or lying down. Patient feedback has reported that discomfort was reduced relatively quickly. Also, patients liked being able to be able to partake in rehabilitation earlier.

The positive outcome of Ceiling Lifts

Positive outcomes from initial testing have prompted doctors to explore the potential of ceiling lifts for rehabilitation even further. The team believes that early training will help people to get out of bed and even out of the hospital faster after accidents and surgeries. The new GH positioning lock is still new, which means that there hasn’t been a great deal of testing with this equipment yet. We haven’t been able to determine whether residents who train whilst bedridden will be ready to be discharged faster.

The plan is to begin testing as part of the next phase of the new feature rollout cycle. During this stage, the functionality of the ceiling lift will continue to expand. The team believes that their experience with Guldmann has been a fruitful and educational one. The GH locking feature is currently intended primarily for bedridden residents. Long term, there will be additional opportunities available for this system. In operating theatres, the lifts may even be able to hold limbs in stable positions while a surgeon completes their work. The new functionality could also be helpful in gait training for residents with neurological conditions.